Well, well, well…here we are again.

I haven't blogged in I don't know how long. But I find myself with some time on my hands and some stuff to say about what is on my needles. But first a quick catch up.

I am now living just outside Boston, working for a major university in fundraising and development. I still miss NYC terribly, but am starting to get settled in (it's only been about 4 years, no rush). I love my job, but hate my commute. But at least I can knit on the bus in the morning…sometimes.

Life has thrown me some curve balls the past few years, including major move (as stated above), my step father's death, the loss of a job that I thought was the perfect fit for me, chronic pain, the passing of a once beloved cat, and the end of friendships that I thought would be lifelong. Yet through it all, I have fought to keep my head above water. One of the major reasons I wanted to move from NYC was that I no longer wanted to just survive, I wanted to LIVE. And I am finally starting to do just that.

But enough of that mushy, vague stuff. You want to know what is on my needles, right?

A few years ago, I made a shawl using Jade 2-ply cashmere in the perfect Claudine shade of pink. And while I really loved it, it wasn't perfect. I adored the Frost Flowers pattern, but overall the shawl was too narrow and too long. And every girl needs the perfect pink shawl. So…to the frog pond it went. And now it's back on my needles 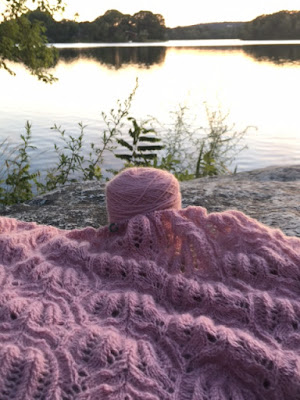 Luckily, I still had the chart that I made from the first one. And although I didn't keep good notes on my stitch count, it was easy just to count the repeats of the pattern to figure out how many stitches I originally cast on. 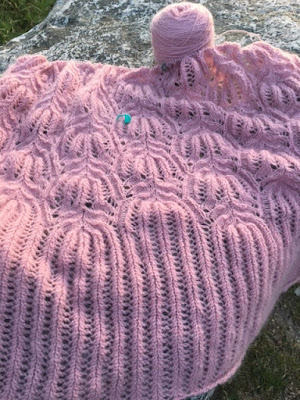 My first shawl had 110 stitches on a size 4 needles. I decided to almost doubled it and cast on 190 stitches for the redux. Keeping in mind that the cashmere will stretch down and pull in, I think this will be closer what I am hoping for.

I originally got the idea from a pin on Pinterest that lead nowhere (I really hate that, don't you). But I consulted the fabulous Ms. Walker's stitch dictionary and was able to find the instructions for frost flowers (it wasn't that hard to figure out which volume it was in, since that pattern is on the front cover), and reversed engineered the rest of the pattern from there. I was about half way through with the first shawl that I found out someone else on Ravely had already done this. Oh well, it was good brain exercise.